While wandering around, looking for things to photograph, I happened across a dandelion puffball, and couldn’t resist the urge to get a good photo of it. I wasn’t planning on featuring, partially because I had already done a few macros, and partially because it wasn’t my subject material of choice for the day. But that wasn’t going to stop me from photographing the dandelion. I enjoy photography, and I didn’t want to pass up a good subject and a chance to practice.

I found I took quite a few macros during my month-long challenge, which surprised me a little. I like to do macros every now and then, but I’m not super into them. I think I did more than usual because of my environment. It was hard to get any big vistas, so I looked to smaller photos, where I could either blur out the background, or edit out undesirable elements. Additionally, spring brought out a lot of flowers, and flowers lend very well to macros. So, when I chanced across a pretty flower, I got up close with the lens. As I did with this nice puffball. It was too good not to share. 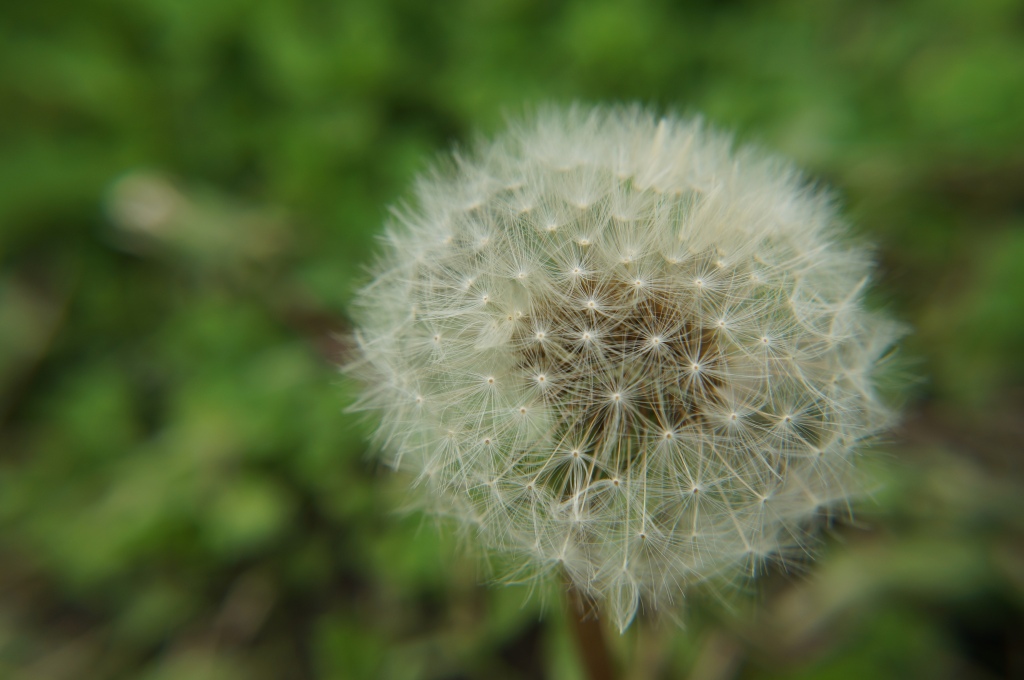 One of my ideas for my photo project was to feature a photo that was simply a texture or pattern. (You can see the one I ultimately selected here.) I took an hour out of an afternoon to wander around, looking for subjects that would give me something interesting. I started by exploring around in my car, because that’s where the camera was. There were plenty of options here. The interior of the car had several patterned fabrics, and textured surfaces throughout. I considered featuring this one, the intricate patterns on the fabric of the backseat. 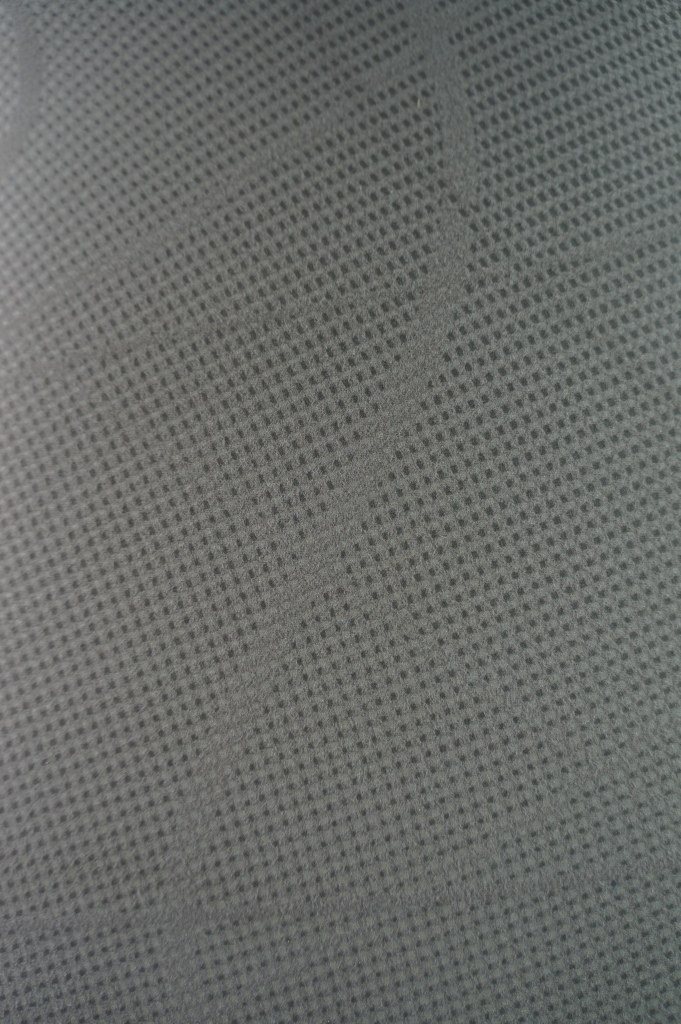 After exhausting my options with the car, I took a walk. I headed over to a rubberized running track. I figured the surface of the track would give a good texture. I was right. I took a few close up photos of the surface. The first few were off the edge of the track. Then I focused in on an area where a white strip was painted over the red surface. It gave an interesting two-dimensional aspect to the photo. Here they are:

This is another photo from one of my sessions in the park. I was shooting off-angle photographs of the playground equipment, focusing on the geometry of some of the structures. I featured this photo, but I this one was a close second. It’s a different piece of climbing equipment, shot from below to silhouette the bars in front of the sky. 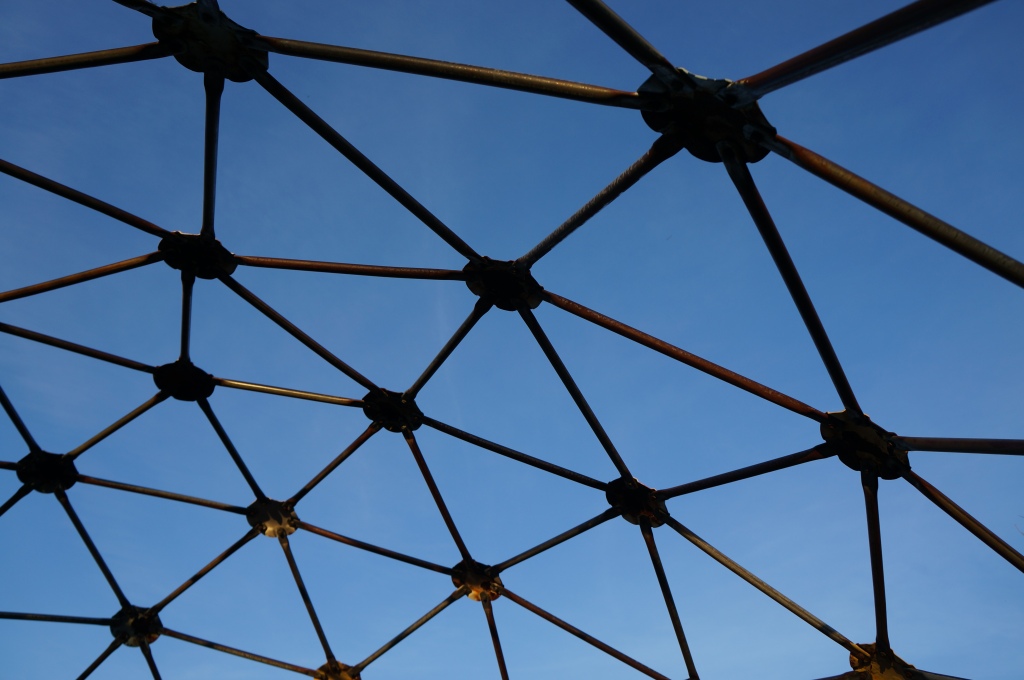 During my month long photo challenge, I decided to photograph one of the many cornfields that are ubiquitous to the Midwest. I wanted to get up close with the brown stalks, using them as the focal point in my photo. (The end result was fairly successful, and that photo was shared in this entry.)

To take the photo, I walked a little ways into the cornfield itself. Almost immediately, I noticed the field was littered with red corncobs, devoid of kernels. I was immediately drawn to them. I took a break from photographing the field, attached a macro filter to my lens, and shot several photos of the cobs. It was shortly before sunset, giving a nice natural light to the photo. I was very pleased with this result.

I didn’t include this photo as a feature, because my goal was a picture of the a field, and I’d already featured one macro image. However, it definitely merits sharing.

As I mentioned, I took a lot of photos that I didn’t feature, for various reasons. However, some of them were still very good, and definitely worth sharing. So here they are, in the order shot.

One of the lakes I visit often has a large grove of cypress trees. They’re a favorite subject of mine. The lake itself is quite picturesque, with deep blue water.

Here’s a wide angle view of the lake, with the cypress trees front and center.

So I’ve completed my 30 day photo project. I was very pleased with how some of the pictures turned out. Others didn’t work out quiet so well, but overall, I ended up with a lot of good photos. I’d hope this has made me somewhat of a better photographer. I’m not sure how much my skill set improved, or if I learned my camera a little better, but I definitely stretched my boundaries a little. If anything, this has enabled me to see more photo possibilities in the world around me.

I’ve got a few subjects that I’d like to try again, to see if I can improve, and get the photo I was initially hoping for. So I’ll be posting these as I attempt them.

I took over 1,400 pictures throughout the month. (Granted, not all of these were for the purpose of the project, a few were personal. But the majority were taken in pursuit of good photographs.) There were a lot of photos that I took but didn’t share, since I was limiting myself to one image a day. The reasons that these photos didn’t make the cut vary, sometimes it was because I liked another image better, or because I’d already featured a similar photo, or it simply wasn’t my goal picture. I’m going to be sharing some of these extra shots in the next few days as well.

Here’s the result of my photo project, in video form. All 30 photos, back to back.

I waited until about an hour before sunset to leave the house again. I’d finally spotted an old barn that looked promising, so I headed back to that spot. Unfortunately, it was now in the shadows, preventing me from getting a good shot.

But I continued driving down the road, because I knew just a little further was another of my favorite subjects, railroad tracks. I’ve been hoping to catch a train throughout this project, but as of yet, haven’t been successful. However, like roads, the railroad tracks themselves also greatly appeal to me as a subject.

I found a spot where the road ran parallel to the tracks. The setting sun was illuminating both. I liked the lighting and the juxtaposition. I shot several frames, manually adjusting the shutter speed to get the light right.

I think this one turned out the best.

I wanted to include a self-portrait in this project. This was a very tricky shot.

I went to the gym, late at night so no one else would be around. Fortunately, the place was pretty empty, and I had an area of the weight room all to myself. I set up my tripod, and attached the camera. I shot a few test pictures, then adjusted the shutter speed to bring out the shadows a bit more.

The problem with self-portraits is that the camera focuses before the shutter is pressed, and doesn’t refocus. This meant almost every image I took was slightly out of focus. But I was shooting solo, so I didn’t have anyone to stand in for me so I could focus, and I don’t have a way to press the shutter remotely. To make it more complicated, I had ten seconds to press the shutter, get in position, and I had to ensure the tripod wasn’t visible in the mirror behind.

This is another subject I’d like to play with a little more, but it wasn’t bad either. The biggest problem was truly the focus, which I had anticipated. The result was less than perfect, but I’m going to share it anyway. I had a few decent ones, but I picked this one more for the composure than anything else. I like that you can see my eyes, but not the rest of my face. (Maybe I’ll put it in Photoshop and see if I can fix the focus.)

It was a good evening for photography, clear skies, good sunlight. So, I set out about an hour before sunset, looking for something intriguing. Again, I was hoping to find a good barn, but I was open to any possibilities. I drove around on the backroads, through the fields, looking and finding nothing.

If I were back out west, this method would yield a subject quickly, but it’s a little bit trickier around here. I found myself still driving around as the sun sank closer to the horizon. I turned north, still looking for barns. The road dipped down through a valley. At the bottom, a small stream ran between the fields. Here, the road necked down to one lane, crossing the stream. The bridge had concert guardrails, arched somewhat like an old Roman aqueduct. Through the arches I could see the setting sun reflecting off the waters in the stream.

I drove across the bridge, parked the car and walked back. I hadn’t seen a single car on this stretch of road, and it was quiet and calm, so I walked out to the center of the bridge. I took a few shots of the setting sun through the arches, framing it with the concrete. I was pleased with the result.

I took a few pictures earlier this afternoon, one of which I was certain would be good enough to make the cut for my blog. When I pulled them up on the computer, however, I was pretty dissatisfied. I tried a few variations on my original theme, before abandoning the idea altogether.

The problem was it was now after dark, and I was without a good photo.

So I grabbed the camera and the tripod and drove a few just down the street. There’s a road was a nice curve to it, which always has some traffic, no matter what time of night. I set up the tripod, set the camera for a long exposure and waited for a car to come along.

When shooting on the tripod, I’ve learned to automatically set a ten second delay. I envisioned getting the taillights of the car, vanishing into the distance. I totally timed it wrong. The car was halfway down the road by the time the shutter opened.

In the thirty seconds the shutter was open, several cars and a diesel went by. The result was pretty awesome. I was so pleased, that I didn’t even take a second shot. This is pretty rare for me, since my philosophy is to always press the shutter a second time, just in case. But, it was late, there wasn’t much traffic, and long exposures like this take a while. Maybe I’ll go back and experiment a little more when I’ve got some time.